From Budapest airport to the city

Budapest Ferenc Liszt International Airport is the international airport serving the Hungarian capital city of Budapest, and by far the largest of the country's four commercial airports. The airport is located 16 kilometres southeast of the center of Budapest.

The closest train station to Budapest Airport Terminal 2 is Ferihegy, with trains operating to and from the Nyugati railway station in Budapest. Nearly 100 trains per day, including InterCity services.From the Ferihegy train station, Terminal 2 is accessible by bus number 200E during the daytime and with night bus number 900 at night time.

As a result of cooperation between MÁV and the Budapest Transport Center, passengers taking the train to the Ferihegy train station can purchase a discount bus ticket for their journey to Terminal 2. Discount bus tickets cost 300 HUF, and are only available together with the train ticket, from ticket offices at railway stations. Discount tickets are only valid between the bus stop next to the Ferihegytrain station and Budapest Airport Terminal 2.
Hungarian state railway company MÁV operates a domestic ticket office at the Ferihegy train station every day from 6:00 a.m. to 6:00 p.m. In addition, train tickets can also be purchased from the ticket machines located on the platforms.MÁV website.

Line 200E
From 4:00 a.m. to 11:00 p.m., bus number 200E commutes between Terminal 2 and the Kőbánya-Kispest metro terminal (metro line M3), via the Ferihegy train station(trains to the Nyugati railway station in Budapest).From the Kőbánya-Kispest metro terminal, passengers can take the M3 metro towards Újpest Központ to reach the city center.
From 11:00 p.m.to 1:00 a.m. bus 200E, from 1:00 a.m. to 4:00 a.m. night bus number 900 operates between Budapest Airport Terminal 2 and the South Pest bus garage.
Line 100E
As of 7 July, a direct bus line connecting the airport with the city center was introduced: the front-door 100E takes passengers to Deák tér. It leaves from Deák tér every thirty minutes from 04:00 to 23:30. The first bus leaves from the airport each morning at 05:00, and the last one at 0:30. Bus 100E stops at the BKK bus stop at the airport between the two terminals on the arrival level.
Passengers may get off the bus going to Deák tér at Kálvin tér and at Astoria. Bus 100E going to the airport only stops at Kálvin tér, but the first two in the morning will also stop at the Astoria M bus stop.

A special ticket must be purchased for bus 100E for HUF 900 – other tickets or season tickets are not valid for this service.Tickets for public transportation priced 350 HUF are available at the airport from BKK at its customer service points, from the post office, the newsagents and from ticket machines at the bus stop. It is also possible to purchase a ticket from the bus driver for 450 HUF.

miniBUD is the official airport shuttle service provider for Budapest Airport.They provide comfortable, fast and favorable transfer solutions for passengers wishing to travel from the airport to the districts of Budapest, and from the city to the airport.You can book your miniBud transfer here.
You can buy single or return tickets from just 7 euros.

Főtaxi, the taxi company with the longest traditions (founded 1913) in Hungary transports passengers between the terminals and Budapest. Főtaxi’s several hundred cars, trained and experienced colleagues ensure a safe basis to satisfy passengers’ needs at a high standard.
Taxi drivers speaking at least one foreign language are in service with large, category ‘A’ cars younger than five years. All cars are equipped with a POS terminal, therefore credit cards are also accepted.
From 1 September 2013 a new Taxi Decree was introduced in Hungary regulating the price* of the taxis at a fixed tariff of 280 HUF/Km (0.95 EUR/Km) in addition to the one-off basic fee of 450 HUF (1.50 EUR) and waiting fee. A ride to the city center should typically cost around 6500 HUF (22 EUR) depending on traffic conditions.
Website: www.fotaxi.hu

Please be aware of exposing yourself at risk by using non-regulated taxi service providers soliciting at the terminal buildings.
Source: Budapest Airport

From Munich airport to the city and the region

Munich Airport is the major international airport of Munich serving Bavariaand the South of Germany.The airport is located 28.5 km northeast of Munich near Freising and is named after Franz Josef Strauss, the former Bavarian Prime Minister.

Rail The S1 and S8 S-Bahn lines connect the airport with the center of Munich, with departures every 10 minutes.S1 is blue line and S8 is yellow line.

There are many ticket option and prices.Find your here.You can take single, day, airport ticket and many more.You can buy ticket with ticket machines at the airport and at most S-Bahn stations.
Lufthansa express bus The Lufthansa Express Bus is the nonstop connection from Munich Airport into the city centre and back again — and at 15 minute intervals. No matter which airline you fly with.

One way tickets costs 10.50 euros.Return ticket costs 17 euros.Journey time to Munich Hauptbahnhof (main station) is 45 minutes.To buy a ticket you can do it here.This is order of stations from airport:

From Barcelona airport to the city

Barcelona–El Prat Airport, is an international airport located 12 km southwest of the centre of Barcelona.It has a good connection with city and the region.
Metro system The line L9 (orange) connects the airport with Barcelona city. This line is divided between North and South, being the L9 South line the one that links between Barcelona’s airport and the various metro stations in the city.The L9 South line stops at both terminals 1 and 2 of Barcelona airport. 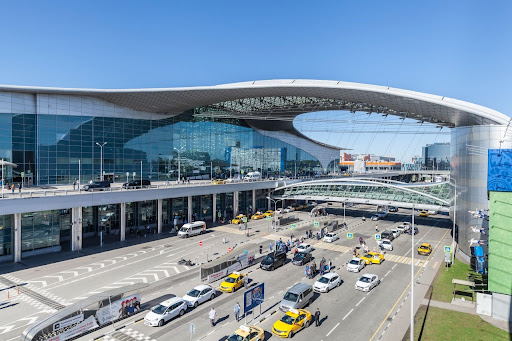 From Sheremetyevo airport to the city

By train Aeroexpress operates a nonstop line, connecting the airport to Belorussky station in downtown Moscow. One-way journey takes 35 minutes. The trains offer adjustable seats, luggage compartments, restrooms, electric outlets. Business-class coaches available.The trains depart airport every 30 minutes and they are punctual.Trains are avaliable from 05.00 am to 00.30 am next day.
Aeroexpress has a lot of fares for passangers.One trip card costs 500RUB, return trip costs 1000RUB and one trip business card costs 1000RUB.Check out other fares to find the best option for your trip.

By bus and metro Moscow can be reached by bus lines: 817 to station Planernaya of Mo…